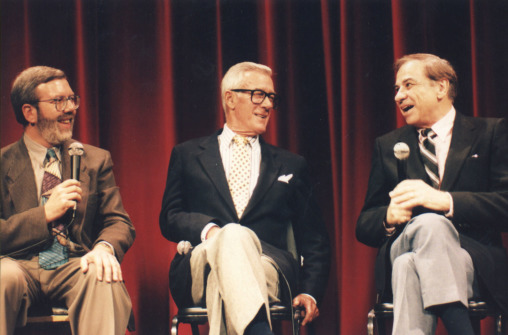 Richard and Robert Sherman have composed music and lyrics for over thirty motion pictures.  They have been nominated for six Oscars, one British Academy Award, and four Golden Globe Awards.  They received the Oscar for Best Song and Best Original Music Score in 1964 for “Chim Chim Cheree” from the Walt Disney film, Mary Poppins.  Their composing credits include such classic family films as:  The Parent Trap, In Search of the Castaways, Mary Poppins, That Darn Cat, Winnie the Pooh and the Honey Tree, The Happiest Millionaire, The Gnome-Mobile, The Jungle Book, Chitty Chitty Bang Bang, The Magic of Lassie,  Huckleberry Finn, The Slipper and The Rose and many more.  I spoke with Mr. Sherman via the telephone from Beverly Hills, California regarding his friend and colleague, Marc Breaux.

STEVE TAFT:  What are some of your initial thoughts or memories that come to mind when you hear the name Marc Breaux?

RICHARD SHERMAN:  A wonderful, consciences gifted guy who was very critical to a lot of projects I worked on.

RS:  His dance routines that he created, enhanced and embellished and fully realized the musical things we wrote.

ST:  You and Robert worked with Marc and Dee Dee Wood on several projects.

ST:  What particular relationship did you and Robert have with Marc and Dee Dee regarding the creative process?
SHERMAN:  Actually, in the case of Poppins, for example “Jolly Holiday” and “Super-Cali-Fragil-Istic-Expi-Ali-Dicious,” they took the song and made the dance material happen out of the song material that was written.  But in the case of Chitty Chitty Bang Bang we actually wrote something that they wanted us to create.  They researched some dances and found an old English folk dance where men jump between poles and danced that way.  So we wrote a song called “Me Ole Bamboo” to their request and that became a big production number in Chitty Chitty Bang Bang.  So it depends. Basically what they would do is take the material and open it up and realize all of the possibilities . . . highly creative individuals.  They did with movement what we did with melody and lyrics.

ST:  “Step In Time” (often referred to as the “Chimney Sweep Dance”) is a remarkable twelve-minute musical and dance sequence in Mary Poppins.  Can you describe how that particular song developed to be the athletic showcase it became?

RS:  “Step In Time” is an excellent example of taking a very little tiny morsel of music and an idea, a “Simon says” concept where every time the chimney sweeps sing, “Round the chimney step in time, link your elbows step in time” or whatever it might be, they (Marc and Dee Dee) would do incredible things with it.  To this day I have never seen a more inventive dance routine in my life than “Step In Time.”  That was Marc, Dee Dee and a brilliant musician by the name of Nat Farber who sat at the piano and musically interpreted on the piano everything they did with their bodies and made “Step In Time” into a magical experience.

ST:  One of my favorite projects that this collection of creative people created is the beautifully written and filmed musical, The Slipper and The Rose . . .

RS:  The Slipper and The Rose Marc did solo . . . on his own.  He went to England and we worked together.  We also worked together on a TV special, Goldilocks with Bing Crosby and his family.  It was combination animation and live action television special that was wonderful.  When it came time to do The Slipper and The Rose, we told our producer, David Frost, that we would very much like to get our great friend and collaborator on so many projects, Marc Breaux.  We felt very fortunate in that.  He did an incredible job in that.  There was a lot of dancing and movement and he did it all.  Marc would stage a scene. He wouldn’t just do dance.  He would stage a scene so the movement was there.  He had a great sense of theatre.  It wasn’t just dance steps.  People mistake choreography for just dance.  It’s for movement . . . whatever it might be . . . particularly in a song.  Not everyone is dancing in a song . . . sometimes they are just moving or talking to each other or walking in a song and he makes it looks so wonderful and natural and keeps the eye moving all the time.

Q: Having created such a song title as “Super-Cali-Fragil-Istic-Expi-Ali-docious” in Mary Poppins . . .

SHERMAN:  You said it well.

Q:  . . . and Chitty Chitty Bang Bang being advertised as “The most fantasmagorical musical entertainment in the history of everything . . .”

SHERMAN:  That’s my word too.  Ian Flemming came up with Chitty Chitty Bang Bang but we came up with fantasmagorical.

Q:   . . . can you provide a unique word description or song title for Marc Breaux?

SHERMAN:  (pause) He needs a huge “Breauxchure!”  That’s off of the top of my head.  Give me some time and I’ll come up with a better one.

Q:  A question for young composers and lyricists: What advice do you have for a young composer or lyricist interested in working in the film business?

SHERMAN:  I always try to tell students when I talk with them - one thing: You have to constantly, constantly hone your talent and prepare.  And luck happens when preparation meets opportunity.  That’s when luck happens.  And you got to get lucky to get into the business.  Lucky doesn’t mean, “Oh, your Uncle is a powerful guy on Broadway, or television, or motion pictures.”  Luck means you’re ready for it.  Too many people get that one shot and then fall flat on their face because they are not ready for it.  So you’ve got to sweat blood and work and dedicate your life to the work, no matter what it may be. The most competitive job in the world is to be in show business.  The second thing is to keep your eyes and ears open for that opportunity, so when the opportunity and the preparation get together - you get lucky.  My advice to anyone that wants to work in the business is you have to work in the hub.  That means New York if you want to be in Musical Theater or L.A. if you want to work in television or film.

Q:  As we wrap up, are there any additional observations regarding Marc Breaux?

SHERMAN:  Number one, Marc is an extremely sweet, modest man.  He is very self-effacing.  He doesn’t have any ego.  He just has a wonderful sweetness about him.  Everybody that knows him, loves him.  I do.  My brother does.  We just think he’s great.  We were just together in Anaheim recently for a Disney event and we sat on a panel together.   He and Dee Dee were both there.  He’s just a sweetheart . . . a great guy.  You know, he was in the service and flew planes during WWII.  He is such a rounded character.  He has acted, performed . . . he was a model . . . and he never really talks about these things.  He just does his particular thing with great skill and a great sweetness about him. Those who have worked with him, loved working with him because he is so understanding and kind.  And he wouldn’t ask them to do something he couldn’t do.  He would show them how to do it.  He was wonderful in that way.  It is a great pleasure to know him and a great pleasure to work with him.