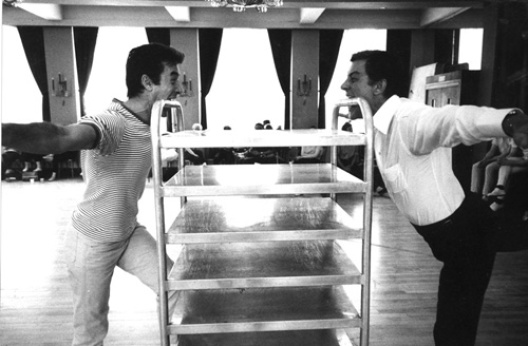 Videographer, Gordon Brooks, Dean of the College of the Arts at the University of Louisiana at Lafayette interviewed Mr. Van Dyke on the set of Diagnosis Murder.  Mr. Van Dyke’s infectious laugh and love and respect for Marc Breaux and Dee Dee Wood is evident throughout.

He was also kind enough to congratulate Marc on-camera which was then shown at the Tribute to Marc Breaux produced by the Performing Arts Department in March of 2000.

GORDON BROOKS: How did you meet Marc Breaux and Dee Dee Wood?

DICK VAN DYKE: I think it was on an Andy Williams Special or a special of that kind.  Marc and Dee Dee were the choreographers.  I thought they were the most attractive couple I ever saw in my life.  They were so easy to get along with.  I was not a professional dancer, but they were able to take what I could do and they made me look like a pro.  So I fell in love with them right away.

GB: What was it like to work with Marc?

DVD:  I have never met a more even-tempered, well-adjusted man in my life.  I can honestly say that I have never met a man that I like, more than Marc.  And do to this day, I’m very fond of him.  He’s a gentleman.  I attribute that to his Southern upbringing.  Always a gentleman.  Didn’t seem to have a temper at all.  And just work-man like.  He was so patient.  Especially with people like me who were not dancers.  He’s a wonderful artist.  He also has a great sense of humor.  Marc is a wonderful laugher.  And so is Dee Dee.  They are both so pleasant to be around and I loved rehearsals with them.

DVD: I think my strongest memory of him is in Mary Poppins.  Of course, we did Chitty Chitty Bang Bang together as well.  But the experience in Mary Poppins was one of the best times I ever had in my life shooting that movie, largely due to my experience of working with Marc and Dee Dee.  They were such “up” people, always fun to work with.  They made every day a pleasure to work.  One of my best memories of Marc is when we went to England to do Chitty Chitty Bang Bang.  He and Dee Dee had worked out all of the dance routines in advance.  And we had our first meeting with the dancing cast who were all British.  Marc and his dance assistant, Phil Laughlin, wanted to show them the dance numbers.  Of course, they wanted to impress them with the American dancership and I think they both injured themselves.  They threw their bodies around with such abandon and did everything so full out, I know they hurt themselves.  I saw Marc limp off the stage.  The whole day was a great experience.  Also, if I would show them a tricky step that I could do, that was a specialty of mine, Marc and Dee Dee would incorporate it, which always gave the dance numbers a little bit of my personality.  They were very good at that.

GB: When you interacted socially, what would the Breaux’s and the Van Dyke’s discuss?

DVD: We would talk about kids.  Marc and Dee Dee had adopted two little boys that were a little younger than mine.  We talked a lot about raising kids and our experiences.  He was about the best male dancer I ever saw.  We were both about the same size and build so I always aspired to do what Marc could do.  He was such an athlete.

GB: Discuss the contributions that Marc and Dee Dee made as a team regarding their choreographic process.

DVD: I’ve seen Dee Dee in recent years do big specials and half-time (Super-bowl) shows.  She’s great at creating the big picture.  Marc is good at laying down the steps for you.  She was always the business-like one.  Getting everybody to work, it had to be Dee Dee because Marc and I had a tendency to play and joke around and have fun.  So it was always Dee Dee who drew us back and made us do it over and over and over again, which we badly needed.  That was why they were such a good pair.  They each had their specialties and worked together so well.

GB: You lived near each other in Cave Creek, Arizona . . .

DVD: I was looking for a house when I went to visit them.  They kept talking about their little place in Cave Creek, Arizona and it just sounded like heaven to me. So we did go down to visit them and fell in love with the area and we bought a house that was not two miles from them in the middle of nowhere and we lived there for a number of years.  Dee Dee and Marc just kept building on to their house.  I remember they invited us over to see their bedroom ceiling because it opened up to reveal those beautiful Arizona stars. They were so proud of that.  It’s gorgeous, a perfect desert house.

GB: Tell us about when you were honored with the Life Achievement Award for Dance.

DVD: Of all of the awards I have received, that was the most valuable award to me.  That was the most important.  There is something about gypsies that I love.  If I could do my life over I would be a dancer (even though I’ve done some).  It was the most fun award.  It was in the afternoon, very relaxed, like a family reunion.  Everyone I had worked with was there, including Marc and Dee Dee.  It was the one time in life they had to give me the hook.  I wouldn’t get off stage.  I kept seeing old friends and anecdotes would come to me and I couldn’t stop.  It was absolutely a great afternoon and it was so great to have Marc and Dee Dee there. Chita Rivera, a dear friend of theirs and mine was also there so it was a great, great reunion.

GB: You also had the opportunity in 1998 to present Marc and Dee with the Lifetime Achievement Award at the American Choreography Awards.

DVD: I was so happy that I was asked to present the award.  They got a standing ovation.  Chita had flown out from New York to be there . . . and she came out and we danced a little something.  It was a marvelous evening.  A lot of love from a lot of people was poured out for Marc and Dee Dee.

GB: Describe the impact that Marc and Dee Dee have had on the entertainment industry.

DVD: I think the longevity of Mary Poppins, made thirty-five years ago, still holds up technically and their dance and choreography I think will always be around.  They were Michael Kidd’s protégés (who I had the opportunity to work with on a road show of The Music Man).  Michael had such good memories of these two kids that were his dance captains.  They learned well from him.  They learned well.  I think that’s where Dee Dee learned to be a slave driver because Michael Kidd is a slave driver.  I think they’ll go down as top choreographers in movies.  Not only were they creative and boiling over with ideas, they made it fun.  Everything was fun.  No matter if it was a twelve-hour day, I loved spending the time with them and everybody says the same thing.