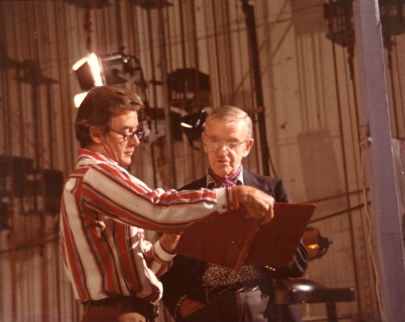 Once upon a time . . . in the summer of 1999 while serving as the Department Head for the Performing Arts Department at the University of Louisiana-Lafayette (then The University of Southwestern Louisiana), I had the pleasure to begin a research project regarding one of the universities former students that had a distinguished career working on Broadway and in television and film. His name was Marc Breaux. The goal of the project was to recognize and to pay tribute to a man and a career that may inspire current and future students in the department for many years to come. The initial research (along with Dr. Paulette Hebert and Dean Gordon Brooks) included a visit to Mr. Breaux's home in Cathedral City, California and ultimately included various interviews with a few of Mr. Breaux's professional colleagues, family members and friends.

Along the way Dr. Hebert and I discovered that publishers are not necessarily interested in "tribute" material focused on the postive contributions a person makes in the world. Long-time Disney composers, Richard and Robert Sherman discovered something similar when working on their book, Walt's Time.  Editor Bruce Gordon notes: "They had shown their book to every publisher in the business, and had been turned down by every one of them. The publishers all said there was nothing revealing, sensational or controversial. It was all too positive, and not at all commercial." The strategy ultimately was to publish the book on their own. I commend the Shermans and their editors for embracing their personal sense of ethics and vison of producing an insightful, interesting, postive and visual work that I am sure will bring a smile to the face of anyone that reads Walt's Time as the memories of so many films and songs that have brought joy to us as children and adults will come rushing back.

Like the Shermans, Dr. Hebert and I had no interest in deviating from our vision of producing a positive retrospective on the life and career of Marc Breaux.  Not quite having the personal resources that perhaps the Sherman Brothers and their editors may have had which led to a print version of their text, I will share excerpts from the research via this site that a visitor may find interesting or perhaps inspiring. I am particularly hopeful that my current students may find value in the material, particularly the interviews.

For many years my web site shared a handful of photos of Marc and his career and an interview conducted when we first met. Upon Marc's passing in the fall of 2013 it was evident that a variety of sources referenced the interview. Film critic, Leonard Maltin was kind enough to note on his Indie Wire web site, Movie Crazy:  "If you’d like to read a first-rate interview with Breaux in which he discusses his career as a performer, choreographer, and television director, click HERE."  A link to the interview was provided to his readers. Additional interviews were conducted during that initial research period and several are included on this site.

A personal note: In a relatively short period of time after meeting Marc, I found myself speaking often with him by phone and traveling to his home in California to visit on occasion. Whether going out to dinner, attending a church service, meeting his friends or sitting quietly and chatting, such visits passed much too quickly. In time, we became close friends and Marc never failed to inquire about my wife (Cindy) and our children. Over the years Marc would call Cindy on her birthday and sing "Happy Birthday" in French (embracing his Cajun upbringing) and cards or phone calls were exchanged on birthdays and holidays. He became an extended member of our family in many ways and a personal inspiration to me. I have never met a more positive human being that had the ability to simply make a day brighter for nearly everyone they came into contact with than Marc Breaux.  Perhaps becoming close to a reseach project is not the best strategy for a writer. However, I valued Marc's friendship much more than a publication. It's my hope that I may honor his memory by smiling a bit more and making the day brighter for those around me.