Arts, Ethics and the Athlete 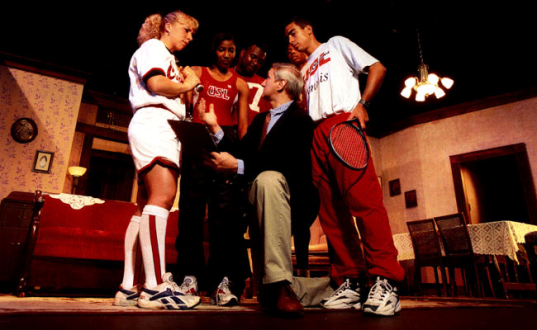 At the University of Louisiana-Lafayette, I introduced a new interdisciplinary course entitled, Arts, Ethics and the Athlete. The purpose of the class was to build a bridge between the arts and athletics and to provide student-athletes a safe and creative environment in which to challenge themselves to examine their personal ethical and value systems and ultimately work on communication skills. It was also an opportunity to bring student-athletes from a variety of athletic disciplines together and to interact with theatre and dance students and to ideally create an understanding and respect of their respective abilities and talents.

It's important for Theatre students to examine their personal moral and value systems as issues of nudity, language, and subject matter may arise regarding play production and it's also important for student-actors to recognize that it's OK to embrace their personal value system whatever it may be.  Theatre artists may one day also face personal ethical dilemma's regarding federal, state and community grant guidelines. Where do they stand on such issues?  Although any personsal viewpoint may change in time, it was important for arts students to reflect upon such issues.

Student-athletes often face daily pressures and temptations and of course, like many young performers, have dreams of stardom and endorsements. I believe such dreams are important as it's our jobs as educators to help prepare students for the next chaper in their lives. An examination of news articles over the years provide numerous examples of student-athletes facing charges of cheating, theft, sexual harassment, abuse or worse. Most distressing are examples of adults (university and professional coaches and athletes), facing similar charges. Of utmost concern are the growing numbers of athletes that cast aside their education to pursue their dream of a life in professional sports without ultimately having a plan or timetable to complete their education. I hope that Arts, Ethics and the Athlete examined such issues in a  meaningful way allowing the artist and athlete to examine their personal life choices. Such choices will ultimately be a reflection of our educational institutions and our society long into the 21st century.

Such an exploration ideally benefited the students as they pursued their dreams and aspirations. Just as many theatre majors may never attain their ultimate goals of working professionally and as many athletes will never play in the NBA, NFL or MLB, it has been a pleasure to see several students in the class work professionally in the theatre, in professional sports or in the world of academics  An example of former students of the class include Scott Theriot who has gone on to attain his Master of Fine Arts degree and is a teacher, Aren Chaisson who has worked as a professional touring actor and continues to create theatre in his hometown of Lafayette, Louisiana and student-athletes Brandon Stokley (NFL), Charles Tillman (NFL), B.J. Ryan (MLB) and Lori (Osterberg) Duncan, an outstanding collegiate softball player, college assistant coach and who now is a teacher. In the fall of 2016 Lori stepped down as Head Coach of a very successful high school softball coach in her home state of Iowa in order that she may concentrate and enjoy raising her sons. She is also a member of the Iowa High School Softball Athletic Hall of Fame.

Students (particularly student-athletes) were often reminded to embrace the opportunity that a college education affords them. One day a student noted: "I'd gladly be the dumbest man in America for a million dollar contract."  I quickly responded: "I'd gladly be your agent."  The point being that the dumbest man in America will certainly be taken advantage of and the athlete would essentially be broke in a very short period of time.  The students received the message. Ideally, the class in some small way allowed students to think twice about the educational opportunities afforded them and perhaps more importantly, about the choices they would utlimately make in life.

The class did not utilize a formal text-book. However, students were required to purchase a newspaper and to read it closely regarding ethical issues within our society which were discussed in class. Communication / presentation opportunities were afforded through creative theatrical-based scenes or exercises and assignments focused on presentation and speech skills. However, rather than have students present in a typical classroom, classes traveled to basketball courts, the football field, and a gym or utlized the stage of the theatre (our classroom).  Students often presented informative speeches, but on their own turf so to speak and on a topic they were knowledgable about and confident in.  Students were also placed in an interview situation (something quite common for student-athletes) and coached in regards to communication skills, but also in the importance of responding as themselves rather than providing standard cookie-cutter type responses. It became a pleasure to see student-athletes begin attending theatre and dance productions and to see Performing Arts                 majors attending various athletic events on campus. Some students even began dating.

One spring I discovered that three baseball players about to graduate could not attend their graduation because a game had been scheduled on graduation Saturday. I was stunned. Graduation is perhaps the single-greatest personal accomplishment for any student-athlete. How could they not participate in such a ceremony?  Well, with really good teams, it's understandable that your teammates often come before yourself.  I immediately sought out the Athletic Advisor, Mr. Danny Cottenham at UL-Lafayette.  Danny and I talked and brainstormed and embraced Konstantin Stanislavsky's concept of asking, "What If?." What if the graduating student-athletes were presented their diplomas before the game?  After approval from then President Ray Authement, two Deans attended a pre-game ceremony at the Ragin Cajun baseball game in their academic robes, stood on the pitchers mound and presented each of the players their diplomas. It's my understanding that such a tradition not only contiues today, but has expanded beyond the baseball team and even includes the President of UL-Lafayette participating in the tradition when possible. When I'm asked about professional accomplishments, I don't hesitate to use this story as an example.

UNI UPDATE: Yesterday, 4/28/18 was a good day. I attended the UNI vs. Illinois State women's softball double-header. After the completion of the games, two graduating seniors were presented their diploma covers since UNI has an away game at Southern Illiinois University next week during our graduation. (Note: All UNI graduating students are mailed their diploma's after the official graduation). Athletic Director, David Harris and President Nook were in attendance. President Nook (in his traditional graduation robe) began the proceedings noting the players degree and future plans as well as their commitment to UNI, the team and their classwork, and noting their good work on and off the field. It was a good moment. During the second game I spent time with a UNI softball parent, whose daughter is a sophomore (and a pre-med major), he applauded the event and looks forward to his daughter having such a ceremony. Interestingly, we discovered we were both SMSU (now Missouri State) graduates. It's a small world.

I cannot thank Athlectic Director Harris, President Nook and Coach Jacobs enought. It took 17 years for some action to take place at UNI as I had conversations with every athletic director or interim athletic director since my arrival. I appreciate that Mr. Harris listened. It's a start and I applaud those that have been instrumental in taking such a step. Now, imagine havng such  a ceremony before the game, with the stands full of fans. Might it have have a bigger impact regarding the importance of recognizing student-athletes that are graduating? I know, there are concerns about pre-game warm-ups, etc.. As a theatre director, I want my cast to be totally focused on their upcoming performance. However, I can site numerous recognition ceremonies and activities that take place before games, during games or at half-time at numerous UNI sporting events. Players are sharp, they can adjust. As an example, the Ragin Cagin's have been doing their student-athlete graduation ceremonies before games for 17 straight years. I'm confident UNI can reflect and develop the process and continue honoring our student-athletes in future years. After the season and after the 2019 softball season is scheduled, there is time to plan. As I teach my Introduction to Theatre students: Planning + Preparation + Execution leads to Success. In the meantime, thank you again to all that were involved in getting UNI started on the right path.

As noted previously, in theatre, we ask "What If?" Should someone say, "We can't.", We love to reply, "Why not?" If the initial idea really has merit, we ideally embrace our sense of creativity and imagination and discover how to implement a specific idea. OK, it's not quite that easy in academic theatre. However, if an organization really examines their priorities and focuses on the ultimate goal rather than themselves, it will become clear what needs to be done. For us in academia, should not our ultimate priority always be the student? Remember, without the student, none of us have a job.
As you may guess, I see little difference between the arts and athletics. In fact, there are times I believe academic theatre could learn from athletics (such as in recruitment strategies, but that's another story). Such an event can be an emotional personal memory for an alumnus, an excellent public relations/news story for a university, a recruitment opportunity for the team, and more importantly, it's the right thing to do. Aspiring Division I athletes and their parents will see that UNI truly embraces the motto's of STUDENTS FIRST and THE RIGHT FIT because ultimately, the goal of any student is to gain a quality education.
My dream is that an entire conference across Division I, II, III and NIAA academic institutions will see the value in honoring STUDENT-Athletes and embrace such a ceremony for all athletes not able to walk across the stage on graduation day due to a their commitment to their teammates. Leading by example is a great quality for any academic or athletic institution.

In sports (as in politics) news and sports programs often focus on the negative. We rarely hear about the positive impact of sports.  One year, the house of an adjunct dance professor in our department burned down. Of course it would be very costly to hire professionals to aid the family in the clean-up. Student-athlete Brandon Stokley organized a number of his football teammates to show up early on a Saturday morning and assist with the clean-up. These players worked for several hours and their help was invaluable not only in the clean-up, but in lifting the spirits of the family. There was never a news story about their work that day and the players didn't expect any specific notoriety for their efforts. However, I'm guessing those student-athletes felt pretty good afterward and I hope they realize that their help was greatly appreciated.

Professors with an expertise or interest in athletics, the arts and/or ethics, may consider creating a similar course at their university as it can be a valuable iinterdisciplinary opportunity.  Such a class can also provide a deeper understanding of the academic value of athletics on a college or university campus and perhaps more importantly, make a difference in the lives of students and continue to build a bridge between the arts and athletics.