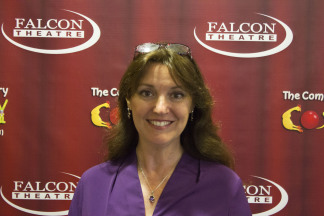 The multi-talented Sherry Greczmiel has had a diverse career that includes working across the United States and overseas as an actress, singer, dancer and choreographer. As her career progressed she gained expertise in a variety of areas including stage and production management and designing costumes, scenery and more.

At the time of this interview Sherry was a producer at the Falcon Theatre in Burbank, California for a number of years and was then named Executive Director as the Falcon Theatre transitioned into the Garry Marshall Theatre in honor of the late great Garry Marshall. Since then she has moved on to new adventures. I am hopeful students will discover her insight into the "business" of great value.

"I like nice!"
Sherry Greczmiel has worked in the theatre as an actress, dancer, choreographer, director, designer and producer. In this sound clip, Ms. Greczmiel offers insight regarding her career and the "business" of theatre for the aspiring young professional.
I Like Nice.mp3
MP3 audio file [4.5 MB]