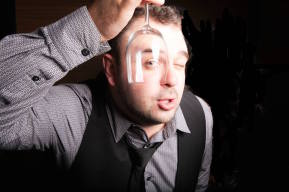 At the time of this interview Joel Waggoner was currently enjoying his Broadway debut in School of Rock as Stanley / Adult Ensemble. He then went on to be cast in the Broadway production of Be More Chill. More recently, Joel returned to Cedar Falls, Iowa to star in the premiere of the musical, The Suffragist directed and choreographed by Rachel Klein and featuring Broadway veterans, Nancy Opel and Cathryn Wake.

He received his MFA from NYU’s Graduate Musical Theatre Writing Program and his undergraduate degree from the School of Music at the University of Northern Iowa (UNI). Multi-talented, Joel is a composer, performer, vocal coach, musical director and violinist. He was a 2012 Dramatist Guild Fellow and his work has been performed in New York at Lincoln Center, 54 Below, Joe’s Pub, and Merkin Recital Hall. He was featured as an actor and orchestrator at the Public Theatre in Southern Comfort at the Public Theatre and composed the music for the musical, Presto Change-O at the Barrington Theater Company which premiered in May of 2016 and directed by Marc Bruni (Beautiful: A Carole King Musical). www.joelwaggoner.com