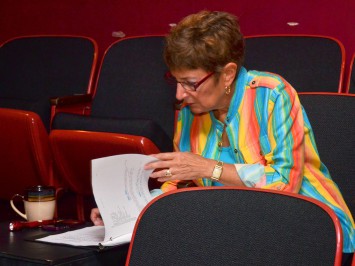 Janice Goldberg has directed plays from Alaska to New York, University to Off-Broadway. She is the recipient of The Kennedy Center Gold Medallion Award for her work with new plays. Janice is the co-author of 12 plays with Susan Bigelow, most notably Rose Colored Glass published by Samuel French, which premiered Off-Broadway and has had productions across the U.S. and Europe. She serves as Producing Artistic Co-Director of AND Theatre Company in NYC and has overseen the production and development of over 100 new plays and is a member of the Stage Directors and Choreographers Society and the Dramatists Guild. Opening Off-Broadway in the fall of 2017 is I Of The Storm.

To learn more about Janice Goldberg go to: http://www.janicelgoldberg.com/

To learn about the AND Theatre Company go to: https://andtheatrecompany.org/