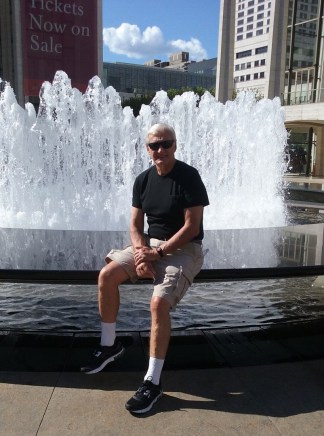 Stephen Taft is a recently retired faculty member of the Department of Theatre at the University of Northern Iowa (UNI) located in Cedar Falls, Iowa. He received his Ph.D. in Fine Arts with an emphasis in Theatre with concentrations in Arts Management and Directing from Texas Tech University, a Master of Arts in Theatre from Missouri State University and a Bachelor of Science in Education from the University of Central Missouri majoring in Theatre and Speech with a minor in Dance.

His artistic skills and interests have allowed him to work as an actor, director and designer and   although primarily an academic, Steve has had the pleasure of working professionally from time to time.  One of his fondest experiences was in the portrayal of Harry Mitchell in the Atlanta premiere of The Sum of Us  for which he was nominated for Best Actor by the Atlanta publication, "Creative Loafing". After arrviving in Iowa, he has worked at the The Old Creamery Theatre Company acting in Amadeus, Tuesdays with Morrie and Greater Tuna and directing Nobody Don't Like Yogi, Broadway Bound, Rounding Third and The Odd Couple and serving as light and sound designer for a variety of productions.

Steve has also worked with the Stephen's College Okoboji Summer Theatre and their talented BFA students and fellow guest professionals portraying Mr. Kraler in The Diary of Anne Frank (2016), Mayor Meekly in Unnecessary Farce (2010 & 2015), Dad in Leaving Iowa (2008) and directing A.R. Gurney's What I Did Last Summer  (2009) and the classic British farce, See How They Run (2010). Other artistic ventures since moving to Iowa include working with the Vox Nova Theatre Company in San Diego and Theatre L'Homme Dieu in Minnesota.  His varied career has allowed him to work in radio, independent films, industrial films, and on various commercials including serving as the principal spokesperson for O'Reilly Automotive.  And if you hit the pause button, you may be able to catch a glimpse of him in the films Sweet Dreams and The Oldest Living Confederate Widow Tells All.

Having a deep respect and curiosity for all aspects of theatre, in recent years Steve has focused on the task of playwriting and reigniting his passion for songwriting creating the holiday musical, Storybook Christmas and Hope the Firefly, a children's play based on the children's stories, "Hope the Firefly" and "Dancing with Daisy" by his best friend and wife of 41 years, Cindy (Urban) Taft. Most recently, Steve completed a contemporary version of Antigone, entitled Kreon, the ten-minute play, Nice and Kind and the one-act plays, Apples and Elephants, Confinamento and other short plays. Additionally, he is the author of the docudrama, FDR Speaks. He is a also a member of ASCAP.  Check out one of his more recent compositions ("He's Losing Touch") on You Tube.

In the early part of his academic career at LaGrange College (Georgia), Steve served as Artistic Director of Fredrich Durrenmatt's The Visit, presented in conjunction with the "Leaders of Humanity" seminars conducted by Mr. Zigmunt Nagorski, President of the Center for International Leadership located in Washington, D.C. Presented as a LaGrange College interdisciplinary project in collaboration between the Department of Theatre and The Department of Business and Economics, Steve teamed with Dr. George Dupuy, Professor of Management, to produce the edited, yet thought-provoking and interactive drama at over forty seminars for such clients as:  The Bell South Corporation, Capital Holding Corporation, Dun and Bradstreet, The Southeast Regional Education Board and the Global Leaders of the South. The program received The Southern Business Administration Association Teaching Innovation Award and the Leavey Award for Excellence in Private Enterprise Education from the Freedoms Foundation of Valley Forge.

Inspired by his experiences with the "Leaders of Humanity" seminars, Steve's interdisciplinary interests continued with the development of a new course entitled, "Arts, Ethics, and the Athlete" at the University of Louisiana-Lafayette. In 1999-2000 he focused his research on dancer, choreographer, actor, director and friend, Marc Beaux (1924-2013).  The work includes interviews with friends and collaborators such as Dick Van Dyke, Richard Sherman, Lesley Ann Warren, Michael Kidd, Andy Williams, Kaye Ballard, and others. A veteran of Broadway, television and film, Marc Breaux was best known for his choreographic work in such films as Mary Poppins, The Sound of Music, The Happiest Millionaire, Chitty Chitty Bang Bang and a host of television and Broadway productions.

Steve has served on the Executive Board of the Southwest Theatre Association as Vice-President of Membership, as editor of Southwest Reports, and as Vice-Chair of Strategic Planning.  On the state level, he has served as President of Theatres of Louisiana and as Chair of the College / University Division.  In Georgia, he served the Georgia Theatre Conference as Vice-President of Membership, Chair of the College/University Division, and newsletter editor.  He has been a member of the Mid-America Theatre Conference and the Southeastern Theatre Conference and an active presenter.  Steve has also had the pleasure to serve as an adjudicator for the American College Theatre Festival (ACTF), the Iowa Association of Community Theatre State Festival, Minnesota AACT/FEST and Regional AACT/FEST, the Iowa High School Speech Association (IHSSA) and the Iowa Thespian Festival. He was a member of United Faculty at UNI and served for a number of years on the United Faculty Central Committee. He also served as the faculty advisor for the UNI Financial Literacy Club.

Representative directing credits include: Picasso at the Lapin Agile, Lost in Yonkers, the world premiere of the award-winning play Guernica (by Cody Daigle-Orians), The Prime of Miss Jean Brodie, The Miracle Worker, Lend Me a Tenor, Picnic, On Golden Pond, The Cemetery Club, The Shadow Box, Blithe Spirit, Nunsense, Godspell, West Side Story, Working, Dancing at Lughnasa, Other People's Money, The House of Blue Leaves, Mauritius, The Sweetest Swing in Baseball, Independence, Doubt and more . In the fall of 2019, he directed One in the Chamber by Marja-Lewis Ryan and concluded his academic artistic career at UNI with The Fractured Mind of Eric Coble (several short comedic radio plays by playwright, Eric Coble) in 2021.